Mesh networks are a super-convenient way of blanketing an entire home or office with high-speed WiFi. Mesh networks have been around for a while but with the introduction of the new and much-improved WiFi 6 standard, these networks have undergone a big step change that provides faster and more stable wireless signals than ever before. WiFi 6 can transmit further to more devices at the same time and handles the radio spectrum with greater efficiency.

Linksys is a name that’s been synonymous with networking equipment for many years. At one point the brand was owned by networking giant Cisco, but a few years back it became part of the Belkin Group, a company that makes a large range of computing accessories and networking equipment aimed at consumers.

The Velop AX4200 is the second WiFi 6 networking product from Linksys and sells for a lower price than the first model. Thanks to increased production, WiFi 6 products are dropping in price and are worth considering. I tested the Velop AX4200 twin-pack kit which is designed for larger homes with up to 6 bedrooms and 80 devices. The Velop AX4200 can also be bought as single units should you want to add an extra node at any time. There’s aslo a triple-pack kit for the very largest homes. The beauty of a mesh system like the Velop AX4200 is that extra units can be added at any time to fill in blank spots or extend the network.

Each of the Linksys Velop AX4200 nodes has four Gigabit Ethernet ports and a USB 3.0 for network

Unlike a lot of the cheaper WiFi 6 mesh network systems, the Velop AX4200 units are quite large and each one has three Gigabit Ethernet ports, a WAN port for connecting to the internet, plus a USB port for attaching a thumb drive that can be used as Network Attached Storage… Unlike Netgear’s Orbi system, the Linksys Velop AX4200 doesn’t have main and satellite devices. Each Velop AX4200 unit is identical. 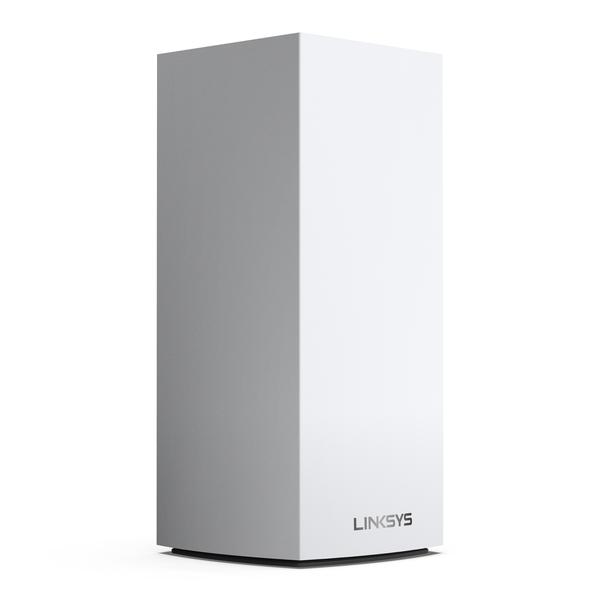 The build quality of the Velop AX4200 units is excellent. Each unit comes with an external power supply. The top of the units has multiple ventilation holes and a single LED status light that shows the status of the node, so you know when it’s working properly. The status light can’t be switched off or dimmed, which can be a bit of a nuisance if the units are in a bedroom. The light is bright enough to interfere with the sleep process.

On the base of each unit is a power switch, a WPS button for automatically connecting with other WiFi devices, plus a reset button for returning the unit to its factory default settings. That’s about all there is to each node which is about the size of a fairly large flower vase. Another great feature of the Velop AX4200 is that it plays very nicely with Apple HomeKit.

The base of the Linksys Velop AX4200 nodes have a power switch, WPS button and a reset.

Setting up a mesh network with the Velop AX4200 system is a proverbial walk in the park thanks to the Linksys smartphone app that guides the user through the whole process. It took me around 10 minutes to get the mesh network up and running and the process is so easy almost anyone could do it.

The Velop WiFi 6 AX4200 system supports Wi-Fi 6 (802.11ax) and is a tri-band design that uses a single 2.4GHz and two 5GHz signals. One of the 5GHz works as a backhaul for sending and receiving data with the other Velop nodes. The maximum theoretical speed of this AX4200 configuration is a blisteringly fast 4.2Gbps, which is much speedier than any domestic broadband connection.

With these kinds of speeds, there’s more than enough bandwidth available for data-heavy streaming like 4K video, hi-res music and online gaming. The system can handle multiple streams without buffering and dropouts. The Gigabit Ethernet ports on each unit can be used to connect non-wireless devices to the network or function as an Ethernet backhaul for anyone lucky enough to have a wired network in their home or office.

Need to know how to prepare a comprehensive financial plan for clients? Master the skills needed in income tax, inv… https://t.co/RouoTxHMy9

In addition to setting up a main wireless network, the Linksys smartphone app can also be used to create a special guest network so that visitors to your home or office can get online without having access to your main network. In addition, the app can also set parental controls for protecting children from accessing parts of the Internet that you don’t want them to see. You can even use the app to block individual devices from accessing the network at specific times. This is ideal for stopping teens from staying awake all night, playing games when they should be sleeping. The app is well designed with a clean interface that’s intuitive and easy to use.

The big advantage of the Velop AX4200 mesh system is the strength and speed of the signals it transmits. I’ve noticed this with the other WiFi 6 routers I’ve used. The two Velop AX4200 units performed brilliantly in my cottage, with its thick stone walls that can defeat older generations of WiFi. The speeds available throughout my home were much faster than my fiber broadband and blazingly fast when I was transferring data between computers on the network. I’ve tested quite a few mesh networks recently, but this is one of the first WiFi 6 models I’ve tried and it’s brilliantly fast as well as being so easy to set up.

Verdict: If you’re looking to set up a WiFi 6 mesh network to cover your whole home and office, I’d strongly recommend you spend the extra money to get something like the Linksys Velop AX4200. You may not have many WiFi 6 compatible devices right now, but any new laptops and smartphones you buy in the future will most likely work with the WiFi 6 standard. Another great feature is the system is certified to work with Apple’s HomeKit standard. The simplicity of setting up the Velop AX4200 is welcome thanks to a clean and simple app. The app is effective although possibly a little basic for networking experts, so if you want advanced controls then maybe go for something like Netgear’s latest Business Essentials WiFi 6 products. My only criticism of the Linksys Velop AX4200 is the bright LED on the top of each node can’t be turned off or dimmed using the app but that’s something that could be fixed in a future firmware upgrade. If you want a WiFi 6 scalable mesh network that’s super fast, the Linksys Velop AX4200 is a great solution and works brilliantly.

Wireless Encryption: up to 128-bit